the last book I ever read (Dances with Snakes by Horacio Castellanos Moya, excerpt three) 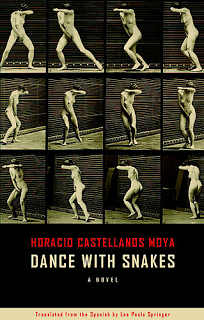 from Dances with Snakes by Horacio Castellanos Moya:

“You two, in my office,” he ordered. He had a fierce look in his eyes and he was scowling. Right away, before they’d even closed the door, he laid into Handal. How could that madman still be out killing people all over the place without having been arrested? And he’d better have a good explanation for the murders of the DICA agents! Didn’t he realize they were the best agents trained by the gringos? And for what? To come back and be killed by a lunatic who was supposedly getting revenge over an affair he’d had with Agent Pineda’s ex-wife three years ago! Did he think anybody was going to buy a story like that?

“It’s the only story that makes sense, sir,” Handal murmured.