the last book I ever read (The Underground Railroad by Colson Whitehead, excerpt ten) 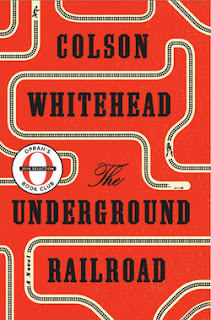 Mingo's daughter Amanda shook on her knees, her family absent. Her bouquet had shed its petals. She gripped the naked stems, the iron wires the blacksmith had drawn out on the anvil last week, just for her. The wires cut her palms, she gripped them so tight. More blood in the dirt. As an old woman she would read about the Great War in Europe and recall this night. She lived on Long Island then, after roaming all over the country, in a small house with a Shinnecock sailor who doted on her to excess. She'd spent time in Louisiana and Virginia, where her father opened colorful institutions of learning, and California. A spell in Oklahoma, where the Valentines resettled. The conflict in Europe was terrible and violent, she told her sailor, but she took exception to the name. The Great War had always been between the white and the black. It always would be.