the last book I ever read (The Iceman Cometh by Eugene O'Neill, excerpt five) 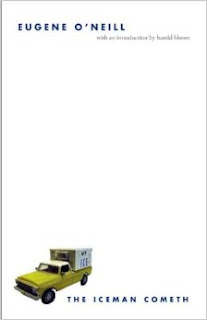 HOPE
Walking? Bejees, do you mean to say you walked?

HICKEY
I sure did. All the way from the wilds of darkest Astoria. Didn’t mind it a bit, either. I seemed to get here before I knew it. I’m a bit tired and sleepy but otherwise feel great.
Kiddingly.
That ought to encourage you, Governor—show you a little walk around the war is nothing to be so scared about.
He winks at the others. HOPE stiffens resentfully for a second. HICKEY goes on.
I didn’t make such bad time either for a fat guy, considering it’s a hell of a ways, and I sat in the park a while thinking. It was going on twelve when I went in the bedroom to tell Evelyn I was leaving. Six hours, say. No, less than that. I’d been standing on the corner some time before Cora and Chuck came along, thinking about all of you. Of course, I was only kidding Cora with that stuff about saving you.
Then seriously.
No, I wasn’t either. But I didn’t mean booze. I meant save you from pipe dreams. I know now, from my experience, they’re the things that really poison and ruin a guy’s life and keep him from finding any peace. If you knew how free and contented I feel now. I’m like a new man. And the cure for them is so damned simple, once you have the nerve. Just the old dope of honesty is the best policy—honesty with yourself, I mean. Just stop lying about yourself and kidding yourself about tomorrows.
He is staring ahead of him now as if he were talking aloud to himself as much as to them. Their eyes are fixed on him with uneasy resentment. His manner becomes apologetic again.
Hell, this begins to sound like a damned sermon on the way to lead the good life. Forget that part of it. It’s in my blood, I guess. My old man used to whale salvation into my heinie with a birch rod. He was a preacher in the sticks of Indiana, like I’ve told you. I got my knack of sales gab from him, too. He was the boy who could sell those Hoosier hayseeds building lots along the Golden Street!
Taking on a salesman’s persuasiveness.
Now listen, boys and girls, don’t look at me as if I was trying to sell you a goldbrick. Nothing up my sleeve, honest. Let’s take an example. Any one of you. Take you, Governor. That walk around the ward you never take—