the last book I ever read (Sally Mann's Hold Still: A Memoir with Photographs, excerpt eleven) 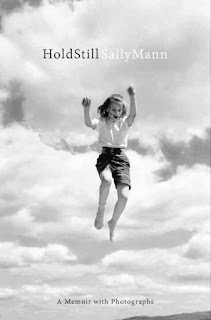 Nothing is deader, or more ungainly, than a dead body. Dead weight is right. The pitch of the hill steepened, and the men were stumbling and sobbing behind us. Periodically Shelby’s legs would be ripped out of our arms as one of the other of the men lost his grip, both emotionally and physically. Shelby’s shoulder would sag heavily to the ground, the man supposed to be supporting it weeping against the chest sutures. Shelby had been allotted a berth alongside the fence at the very top of the hill and as we approached it the two friends, hooking a baseball cap on the bouncing testicles for the last time, lowered their end of Shelby and peeled off into the woods, leaving us holding the legs. Sighing, we reversed ends and each of us wrapped our arms around Shelby’s clammy torso in an unsettlingly intimate embrace. At the count of three, we hefted him upright, his naked body pressed against us, and man-hauled him to his weedy little plot. At a second count of three, we both released and Shelby folded to the ground, his head making a sickening melon-y sound.