the last book I ever read (Mislaid by Nell Zink, excerpt three) 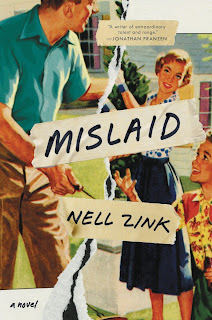 from Mislaid by Nell Zink:

Lee was serious about poetry. He thought America was where all the most important work of the 1960s was being done. He really meant it, and could explain it. John Ashbery, Howard Nemerov, and his favorite, Robert Penn Warren. Then the Beats. He had met them all in New York, and they all had a weakness for handsome Southerners who owned counties.

At first Lee had nothing to do with the college. But then a poet friend remarked that a girls’ college in the middle of nowhere sounds like something from Fellini, and he got an idea. He asked the English department to pay for a visit from Gregory Corso.

Poets came all the way from Richmond to hear him. But the girls stayed cool and distant, even through “Marriage.” Corso went back to New York and told people Lee lived in a time capsule where Southern womanhood was not dead. Two publishers and a novelist transferred their daughters to Stillwater.