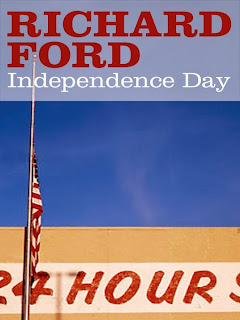 from Independence Day by Richard Ford:

Past Exit 16W and across the Hackensack River from Giants Stadium, I curve off into the Vince Lombardi Rest Area to gas up, take a leak, clear my head with coffee and check for messages.

The “Vince” is a little red-brick Colonial Williamsburg-looking pavilion, whose parking lot this midnight is hopping with cars, tour buses, motor homes, pickups—all my adversaries from the turnpike—their passengers and drivers trooping dazedly inside through a scattering of sea gulls and under the woozy orange light, toting diaper bags, thermoses and in-car trash receptacles, their minds fixed on sacks of Roy Rogers burgers, Giants novelty items, joke condoms, with a quick exit peep at the Vince memorabilia collection from the great man’s glory days on the “Five Blocks of Granite,” later as win-or-die Packer headman and later still as elder statesman of the resurgent Skins (when pride still mattered). Vince, of course, was born in Brooklyn, but began his coaching career at nearby Englewood’s St. Cecilia’s, which is why he has his own rest area. (Sportswriting leaves you with such memories as these.)