the last book I ever read (Gottland by Mariusz Szczygiel, excerpt two) 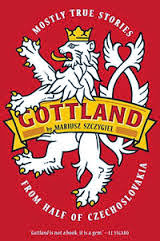 from Gottland: Mostly True Stories from Half of Czechoslovakia by Mariusz Szczygiel:

“Bata approached our parents, asking them to sell him their beloved orchard. They refused, because they’d waited twenty years for it to produce fruit. My brother, my sister, and I were already supporting ourselves—we were all working for Bata. The head of personnel threatened us, saying that if we didn’t force our parents to sell the land, we needn’t bother coming to work the next day. So we put pressure on our poor father, who wept as he sold the land for a fifth of its value, just because Mr. Bata had a whim” (Josef and František Hradil).

In analyzing the documents, the author reveals that in the period from 1927 to 1937 not a single worker went from Bata into retirement. The workforce was systematically rejuvenated. Workers were laid off for any reason at all at least ten years before retirement.