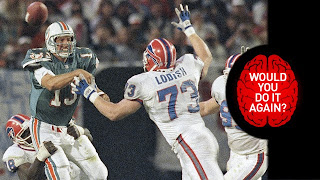 "People that I've talked to about me being on the list to sue the NFL say things to me like, 'You knew what you were getting into.' Let me explain something to you: The hell we did. The hell we did."﻿

please pardon me for posting something/anything? (hello Todd Rundgren) during a Carolina basketball game, even with a thirteen-point lead (there. I've jinxed us. it's ten now). some things (actually almost everything) are out of my control. but I spoke to Mike Lodish, a defensive lineman out of UCLA who played in more Super Bowls than any other player in NFL history, and one of the more than 4500 former players who are suing the League over concussions and other head injuries.