the last book I ever read (David McCullough's The Johnstown Flood, excerpt five) 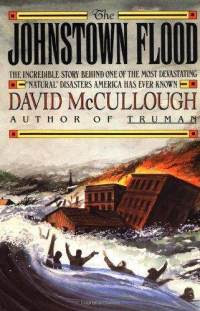 There were many, too, who looked upon the disaster as a time of the apocalypse. Countless sermons on “The Meaning of the Johnstown Flood” were delivered in every part of the land for many Sundays running. One Pittsburgh preacher compared the “wolf cry” about the dam breaking to those in his congregation who tired of hearing him on the admonitions of the Lord. Another said that the lesson was to be ever prepared to meet thy Maker.

In New York the illustrious Reverend T. DeWitt Talmage, using the 93rd Psalm as his text (“The floods have lifted up, O Lord, the floods have lifted up their voice; . . . “), told an audience of some 5,000 that what the voice of the flood had to say was that nature was merciless and that any sort of religious attitude toward nature meant emptiness. “There are those who tell us they want only the religion of sunshine, art, blue sky and beautiful grass,” said Talmage. “The book of nature must be their book. Let me ask such persons what they make out of the floods in Pennsylvania.”

Not a few ministers chose to talk about the spirit of sympathy that was sweeping the country. The New York Witness, a religious newspaper, went so far as to say there was a “loving purpose of God hidden in the Flood,” which turned a great many stomachs in Johnstown.

But the theme that set the most heads nodding in agreement was the old, old theme of punishment from on high. The story of Noah was read from thousands of pulpits. (“And God looked upon the earth, and, behold, it was corrupt; . . . And God said until Noah, The end of all flesh is come before me; . . .”) This was The Great American Flood; it had been a sign unto all men, the preachers said, and woe unto the land if it were not heeded. The steel town had been a sin town and so the Lord had destroyed it; for surely only a vile and wicked place would have been visited by so hideous a calamity.

It was a line of reasoning which many people were quick to accept, for at least it made some sense of the disaster. But it was a line of reasoning which met with much amusement in Johnstown, where, as anyone who knew his way about could readily see, Lizzie Thompson’s house and several rival establishments on Green Hill had not only survived the disaster, but were going stronger than ever before. “If punishment was God’s purpose,” said one survivor, “He sure had bad aim.”