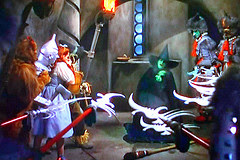 the way life used to be”

Good, but not great. I’m pretty much in agreeance with Ben Brantley’s March ’06 review in the Times that the performers outshine the book and the music.
Though I am seriously considering “getting the band back together” just to cover “Jerry Likes My Corn.”
For those who have invested multiple hours watching the Maysles brothers documentary, know that Mary Louise Wilson nails the voice of elderly Edith Beale perfectly.

Lovely weather and scenery, but you pretty much have to be there by five to get a place on the lawn – which we did, but it left us in the far, far northeast corner. And the movie doesn’t start until 9 (actually they played a commercial for Nancy Drew followed by a Merry Melodies short before Annie Hall came on) and that far back at least, the sound sucks (bad echoes – the acid flashback of audio). I pretty much know all the dialogue, but that still wasn’t enough to approach enjoyment once the movie began.

I am, of course, aware that it is terribly impolitic to slag Robert Christgau (dean of all rock critics) in any way, shape, or form, but it was nevertheless quite amusing to see The Dean hurriedly scramble towards the underside of a picnic table (leaving his wife standing in the drizzle beside Rolling Stone executive editor Joe Levy) when the rains came during Apples in Stereo’s set (dude seems to have more aqua issues than the Wicked Witch of the West). I kept imagining the headline “Apples Play While Christgau Cowers” but I don’t expect I’ll be seeing such.
So on to “the review”:
With the right drugs, the sound of openers Dragons of Zynth might be described as funk, and Apples in Stereo rendered a pleasant, power pop (if long) middle set. And then the rains stopped and Television took the stage.
The absence of Richard Lloyd was most palpable (he had previously proclaimed on his website that the Summerstage show would be his last with Television), and Tom Verlaine was quite caustic about it, apologizing that the band’s “regular guitarist” was hospitalized and so wouldn’t be with them. In fact, not until replacement Jimmy Ripp approached the center mic to wish a speedy recovery was Lloyd even mentioned by name. And folks such as I who are most steeped in the Adventure/Marquee Moon era were likely further disappointed when only three songs (not counting the completely reworked and chorusless “Prove It”) from those two albums (“Venus de Milo,” “Glory” and the afternoon closer “Marquee Moon”) got played.
But it was Television (or at least three-quarters of Television) and it was free so . . .

Other stuffs in the mirrored past: my first round of golf in the last 13 years. I currently possess both soreness and a golf tan (sunburned left arm and pale hand from wearing the golf glove).

In case you live under a rock: The White Stripes’ Icky Thump was released today (alas, I will not be attending tonight’s “secret” show at Irving Plaza (bitch moan piss grumble grumble))

Things to do this coming Saturday night (if you’re not making your third consecutive weekend jaunt to the Garden State): The Silos and Ian Hunter at Highline Ballroom or Glenn Mercer and Wild Carnation at Maxwell’s (yes, I know Hoboken’s in New Jersey, but I will be much further south)

Currently reading (or at least carried along in my backpack the past several days):
Victor Sebestyen's Twelve Days: The Story of the 1956 Hungarian Revolution (so far, so good)

And Kings of Leon pics are up at last concert I ever saw (with Animal Collective and Television soon to follow).
Posted by Rob Trucks at 4:34 PM