the last book I ever read (Lonely Boy: Tales from a Sex Pistol by Steve Jones, excerpt nine) 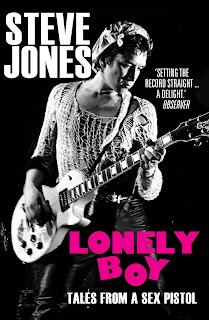 I was actually working with The Avengers when I got the call to say that Sid had died. Obviously Nancy had gone ahead of him to see if she could find a connection in the afterlife. I know that will sound dark, but it was a dark time. I’ve got no inside knowledge of what happened to either of them, but it was fucking grim. When I was told that Sid had died, I didn’t have a lot of feelings about it. I didn’t have a lot of feelings about anything at that stage, to be honest, so when some guy from Rolling Stone called me up, I just said the first thing that came into my head, which was: “well, at least we’ll sell some records now.’

In hindsight it was probably a stupid response, and I could tell that the guy was shocked. But it was also a very Sex Pistols thing to say, which in a strange way – as the idea of the band meant as much to him as it did to any of us – was maybe what Sid would’ve wanted. Later on, I did feel sad about what happened, especially through talking to his mum, who I got on with pretty well. Sid was not an idiot, he was quite an intelligent bloke, but one he was in the band the logic of his situation pushed him down a very dark track. As I’ve said, if we’d called him Sid Kind of Sid Gentle, he might’ve tried to live up to that instead, but I don’t supposed he’d still be on so many T-shirts.