the last book I ever read (A Horse Walks Into A Bar: A Novel by David Grossman, excerpt ten) 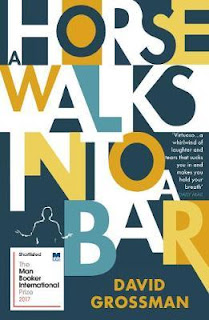 from A Horse Walks into a Bar: A Novel by David Grossman:

“I suddenly got the idea of thinking about a soft-boiled egg. Don’t look at me like that. When I was little I couldn’t stand eating soft-boiled eggs, the runny stuff made me gag, and the two of them would get mad and say I had to eat it, that all the vitamins were in that part, and there was yelling and slapping. Where food was concerned, by the way, she had no qualms about hitting. In the end, when nothing else worked, they’d tell me that if I didn’t eat my egg they’d leave the house and never come back. But I still wouldn’t eat it. So they’d put their coats on and pick up the key and stand in the doorway saying goodbye. And scared as I was to be left alone, I still didn’t eat it. I don’t know where I got the guts to stand up to them, and I argued, too, playing for time, and I just wanted it to stay like that forever, with them standing next to each other and talking to me, both the same way…”

He smiles to himself. He seems to be shrinking, his legs swinging in the air.