the last book I ever read (History of Wolves: A Novel by Emily Fridlund, excerpt six) 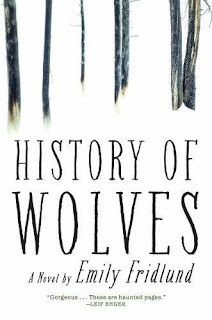 from History of Wolves: A Novel by Emily Fridlund:

“When I was your age, I wrote a novel,” my mother told me. “I put on Macbeth in my parents’ backyard with a cast of twenty characters! It was a funny version, actually.” She scrunched up her face and spoke with an exaggerated British accent: “Out, out damned Scot!” She waited for me to laugh but I wasn’t sure what part was funny. “Here,” she said then, sighing, and handed me a wand she’d made from a birch branch rolled in glue and glitter. She wanted very badly for me to cavort and pretend, to prove I was unharmed, happy. During those years she went to church on Saturdays as well as Sundays, to the Catholic and Lutheran services as well as the interfaith one, to cover all her bases. She never asked me to go along. She said she was a Religion Mutt. She couldn’t decide what mattered most: good works or God’s grace. She couldn’t settle the sacrament of blood: man’s flesh or empty metaphor. “Both sort of suck,” she said, when discouraged. What she did know, and believed with all her heart, was that it was some combination of private school and television that had corrupted her mind and cheapened her natural talents.