the last book I ever read (The Tunnel by Ernesto Sábato, excerpt one) 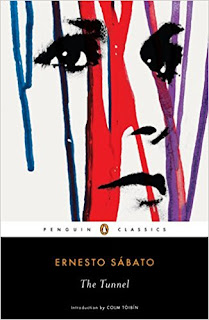 from The Tunnel by Ernesto Sábato:

As I was saying, my name is Juan Pablo Castel. You may wonder what has motivated me to write this account of my crime (I may not have told you that I am going to relate all those details) and, especially, why I want to publish it. I know the human soul well enough to predict that some of you will believe it is from vanity. Think what you want, I don’t give a damn. It has been a long time since I cared a fig for men’s opinions or their justice. Go ahead, then, believe if you wish that I am publishing this story out of vanity. After all, I am made of flesh and blood and hair and fingernails like any other man, and I would consider it unrealistic for anyone to expect special qualities of me—particularly of me. There are times when a person feels he is a superman, until he realizes that he, too, is low, and vile, and treacherous. I do not need to comment on vanity. As far as I know, no human is devoid of this formidable motivation for Human Progress. People make me laugh when they talk about the modesty of an Einstein, or someone of his kind. My answer to them is that it is easy to be modest when you are famous. That is, appear to be modest. Even when you think a person hasn’t the slightest trace of vanity, suddenly you discover it in its most subtle form: the vanity of modesty. How often we see that kind of person. Even a man like Christ—whether real or symbolic—a being for whom I have always felt, indeed, still do, the deepest reverence, spoke words that were motivated by vanity—or at least by arrogance. And what can you say of a Leon Bloy, who defended himself against the accusation of arrogance by arguing he had spent a lifetime serving people who did not deserve to lick his boots. Vanity is found in the most unlikely place: in combination with kindness, and selflessness, and generosity. When I was a boy I used to despair at the idea that my mother would die one day (as you grow older you learn that death is not only bearable but even comforting). I could not imagine that she might have faults. Now that she is dead, I can say that she was as good as a human being can ever be. But I remember in her last years, when I was a grown man, how at first it pained me to discover a very subtle trace of vanity or pride underlying her kindness and generosity. Something much more illustrative happened to me personally when she had an operation for cancer. In order to arrive in time I had to travel two full days without sleeping. When I reached her bedside, a tender smile lighted her face as she murmured a few words of sympathy (imagine, she was sympathizing with my fatigue!). And in the obscure depths of my being I felt the stirring of vain pride for having come so promptly. I confess this secret so that you will see I am sincere when I say that I am no better than any other man.