the last book I ever read (Wonder Boys: A Novel by Michael Chabon, excerpt one) 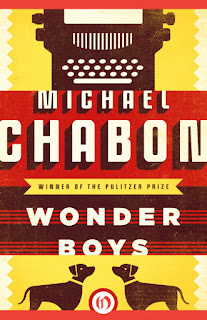 I remember I’d let my senior workshop go home early that afternoon, telling them it was because of WordFest; but everyone looked over at poor James Leer as they filed out of the room. When I finished gathering all the marked-up dittoed copies and typed critiques of his latest odd short story, shuffling them into my briefcase, and putting on my coat, and then turned to leave the classroom, I saw that the boy was still sitting there, at the back of the classroom, in the empty circle of chairs. I knew I ought to say something to console him—the workshop had been awfully hard on him—and he seemed to want to hear the sound of my voice; but I was in a hurry to get to the airport and irritated with him for being such a goddamn spook all the time, and so I only said good-bye to him and started out the door. “Turn out the light, please,” he’d said, in his choked little powder-soft voice. I knew that I shouldn’t have, but I did it all the same; and there you have my epitaph, or one of them, because my grave is going to require a monument inscribed on all four sides with rueful mottoes, in small characters, set close together. I left James Leer sitting there, alone in the dark, and arrived at the airport about half an hour before Crabtree’s plane was due, which gave me the opportunity to sit in my car in the airport parking garage smoking a fatty and listening to Ahmad Jamal, and I won’t pretend that I hadn’t been envisioning this idyllic half hour from the moment I dismissed my class. Over the years I’d surrendered many vices, among them whiskey, cigarettes, and the various non-Newtonian drugs, but marijuana and I remained steadfast companions. I had one fragrant ounce of Humboldt County, California, in a Ziploc bag in the glove compartment of my car.