the last book I ever read (The Visiting Privilege: New and Collected Stories by Joy Williams, excerpt one) 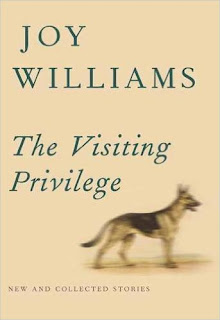 Jones and his wife have one child, a daughter, who, in turn, has a single child, a girl born six months ago. Jones’s daughter has fallen in with the stars and is using the heavens, as Jones would be the first to admit, more than he ever has. It has, however, brought her only grief and confusion. She has left her husband and brought the baby to Jones. She has also given him her dog. She is going to Mexico, where soon, in the mountains, she will have a nervous breakdown. Jones does not know this, but his daughter has seen it in the stars and is going out to meet it. Jones quickly agrees to care for both the baby and the dog, as this seems to be the only thing his daughter needs from him. The day of the baby’s birth is secondary to the positions of the planets and the terms of houses, quadrants and gradients. Her symbol is a bareback rider. To Jones, this is a graceful thought. It signifies audacity. It also means luck. Jones slips some money in the pocket of his daughter’s suitcase and drives her to the airport. The plane taxis down the runway and Jones waves, holding all their luck in his arms.