the last book I ever read (The Stranger by Albert Camus, excerpt five) 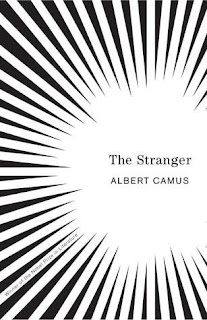 Between my straw mattress and the bed planks, I had actually found an old scrap of newspaper, yellow and transparent, half-stuck to the canvas. On it was a news story, the first part of which was missing, but which must have taken place in Czechoslovakia. A man had left a Czech village to seek his fortune. Twenty-five years later, and now rich, he had returned with a wife and a child. His mother was running a hotel with his sister in the village where he’d been born. In order to surprise them, he had left his wife and child at another hotel and gone to see his mother, who didn’t recognize him when he walked in. As a joke he’d had the idea of taking a room. He had shown off his money. During the night his mother and his sister had beaten him to death with a hammer in order to rob him and had thrown his body in the river. The next morning the wife had come to the hotel and, without knowing it, gave away the traveler’s identity. The mother hanged herself. The sister threw herself down a well. I must have read that story a thousand times. On the one hand it wasn’t very likely. On the other, it was perfectly natural. Anyway, I thought the traveler pretty much deserved what he got and that you should never play games.