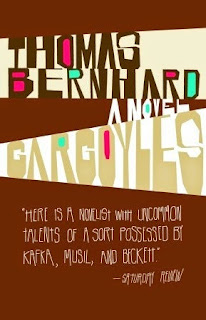 Students were always prey to a kind of restlessness, I said, because as long as they are at school they live in a no-man’s land between the parents they have left behind and the world they cannot yet attain, and their instincts still draw them back to their parents rather than toward the world. There are often tragedies inside that no-man’s land, which happen when they realize that they can neither return to their parents nor step out into the world. In the last six months in my dormitory alone three students have killed themselves, I said. Up to the last, there had not been the slightest symptom of emotional or psychic trouble in any of the three.

I myself had never even though of taking my life, I said. But my father remarked that the idea of suicide had always been a familiar one to him. Even as a child, when other ideas became too much for him, he had often sought refuge in this idea. But whenever the idea did come into his head, it had always taken the form of an alternative that made life possible, hence something rather restful, never something in its own right. Both of us were thinking how dangerous it was to have my sister continually absorbed in thoughts of suicide, either brooding about it or actually attempting it. From the time she was little she had inclined toward self-destruction. What had first been a bit of dramatics, my father said, might later develop into a genuine emotion that could end in the real thing.

Beyond Abraham the hills were covered with large orchards. The farmers had set out their casks of cider in the sun. The houses are old. There is hardly a more isolated region than that between Geistthal and Hauenstein.