the last book I ever read (The Goalie's Anxiety at the Penalty Kick, excerpt three) 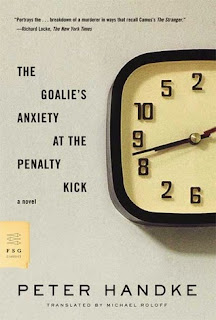 The policemen, who made the usual remarks, nevertheless seemed to mean something entirely different by them; at least they purposely mispronounced phrases like “got to remember” and “take off” as “goats you remember” and “take-off” and, just as purposely, let their tongues slide over others, saying “whitewash?” instead of “why watch?” and “closed, or” instead of “close door.” For what would be the point of their telling him about the goats that, he should remember, had once, when the door had been left open, forced their way into the pool, which hadn’t even been officially opened yet, and had soiled everything, even the walls of the restaurant, so that the rooms had to be whitewashed all over again and it wasn’t ready on time, which was why Bloch should keep the door closed and stay on the sidewalk? As if to show their contempt for him, the policemen also failed to give their customary salutes when they drove away—or, anyway, only hinted at them, as though they wanted to tell Bloch something by it. They did not look back over their shoulders. To show that he had nothing to hide, Bloch stayed by the fence and went on looking in at the empty pool. “Like I was in an open wardrobe I wanted to take something out of,” Bloch thought. He could not remember now what he had gone to the public pool for. Besides, it was getting dark; the lights were already shining on the signs outside the public buildings at the edge of town. Bloch walked back into town. When two girls ran past him toward the railroad station, he called after them. Running, they turned around and shouted back. Bloch was hungry. He ate at the inn while the TV set could be heard from the next room. Later he took a glass in there and watched until the test pattern came on at the end of the program. He asked for his key and went upstairs. Half asleep, he thought he heard a car driving up outside with its headlights turned off. He asked himself why he happened to think of a darkened car; he must have fallen asleep before he figured it out.