the last book I ever read (There Once Lived a Girl Who Seduced Her Sister's Husband, and He Hanged Himself by Ludmilla Petrushevskaya, excerpt one) 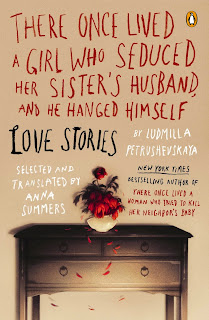 Later, Klava reluctantly recounted the tragic events that had led to her homelessness. Misha the grandson had had a small publishing business that printed calendars. He’d wanted to expand, and so he put out an expensive monograph by a Moscow artist (who had convinced Misha that he was the artist of the moment). The book didn’t sell, and Misha owed money all around. The meter was ticking, and finally his creditor sent “shakers”—thugs who shake out money.

By then Oksana was taking classes part-time, in the evenings, and had found work at a landscape design company. Graduation was postponed by two years. She was paid very little but did impeccable work for both the owner and her bookkeeper. What Oksana missed most was her English class. She always carried in her purse the same book, The Hound of the Baskervilles, and tried to read it on the train but immediately would doze off.