the last book I ever read (In Persuasion Nation by George Saunders, excerpt four) 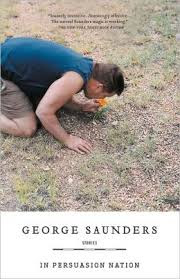 from In Persuasion Nation by George Saunders:

In a lovely urban coincidence, the last two houses on our block were both occupied by widows who had lost their husbands in Eastern Europe pogroms. Dad called them the Bohemians. He called anyone white with an accent a Bohemian. Whenever he saw one of the Bohemians, he greeted her by mispronouncing the Czech word for “door.” Neither Bohemian was Czech, but both were polite, so when Dad said “door” to them they answered cordially, as if he weren’t perennially schlockered.