the last book I ever read (Tiger Rag: A Novel by Nicholas Christopher, excerpt three) 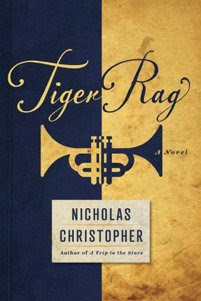 from Tiger Rag: A Novel by Nicholas Christopher:

Even in less turbulent times, it would have been strange for Devon to revisit that house and bunk down in her former bedroom: the dresser filled with old clothes, a poster of Duke Ellington in tails over the bed, the clarinet she played in the school band on a shelf. As a kid, she had taken lessons on the Steinway grand in the living room, which she hadn’t played in years. She moved out of the house at seventeen and rarely returned. She had taken her small collection of vintage instruments—two trumpets, a mandolin, a saxophone once played by Johnny Hodges, and the clarinet she sold—and two thousand CDs, nearly all jazz, that were stacked around her tiny living room overlooking Corona Boulevard. As a kid, she was always plugged into a Walkman. She had a good ear. She augmented her lessons by playing along to Earl Hines and Horace Silver, to McCoy Tyner’s bop and Memphis Slim’s boogie, mimicking their licks as best she could. She became as much a student of jazz as a musician. Her tastes were broadly eclectic: she was equally attracted to James Johnson’s stride piano and Jason Moran’s historical fusion, which took a famous piece like Johnson’s “You’ve Got to Be Modernistic” and improvised a dozen sequences around the ragtime core. But she found her real model in Ahmad Jamal, the pianist she most admired. Classically trained, endlessly inventive, Jamal worked a broad canvas. He was ambitious, referring to his trio as an orchestra, exploring every jazz form that preceded him, and experimenting on the electric piano. His renditions of “Perfidia” and “But Not for Me” set the standard for Devon: the radical chord shifts, subtle colorations, and Afro-Cuban rhythms.