the last book I ever read (The Art of Fielding, excerpt seven) 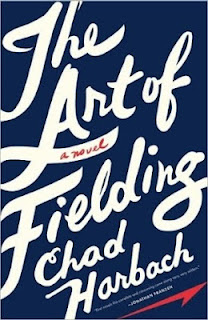 “Huh.” Pella imagined in a flash the restaurant she would own: small and white, all painted white, but warmly so. And every so often she would take a white chair or a white table and paint it according to her mood, paint a door frame or a section of filigreed molding, hand a canvas on the white wall, so that bit by bit the whiteness of the restaurant would emerge into color. So as customers sat there over the course of weeks and months and years the place would slowly bloom and change before their eyes, sliding from whiteness into something ingeniously raucous, a riot of green and mango and orange. And then when the job was finished she’d obliterate what she’d done with a blizzard of white paint and start again. That was the kind of restaurant she’d like to own. The food being served was fuzzier in her mind: she saw the white plates move and clatter but couldn’t tell what was on them. She could see the clean sharp arrangements on the plates, the contrasts of color and texture, but not the foods themselves. She’d have a lot to learn about food. And really when the restaurant actually opened she’d be so busy cooking, running the kitchen, that she wouldn’t have time to paint. So really she’d have to develop a whole new idea of restaurants and how they worked, not an interior decorator’s idea, but a chef’s idea, and this was an idea she didn’t yet have, but would maybe someday like to have. Or maybe she didn’t want to be a chef at all, but the possibility of doing something, pursuing something, seemed, for the first time in a long time, not only appealing but real.