the last book I ever read (So Long, See You Tomorrow) 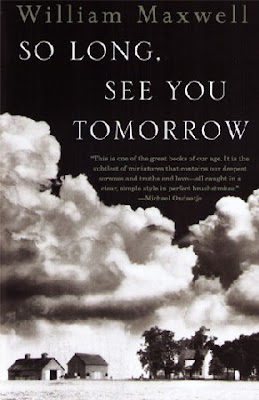 from So Long, See You Tomorrow by William Maxwell:

He was perfectly aware of his wife's good qualities. She worked like a slave, from morning till night, holding up her end of things. She was a good mother. There was no question about any of this. Sometimes he thought it was just that they were so used to each other. He knew how she felt about almost everything, and, most of the time, what she was going to say before she said it. If they had been brother and sister it wouldn't have been very different--except that she was jealous. If he so much as looked at another woman she acted as if he'd done something unforgivable. Once or twice she worked herself up to such a pitch that she went upstairs and started packing. He knew that such persuasion as he could muster was halfhearted and wouldn't convince her to change her mind. If she was bent on leaving him there was nothing he could do about it. She didn't leave him, she only threatened to. None of those women meant anything to him, he said. And with her face averted she said, "The trouble is, I don't mean anything to you either."
Posted by Rob Trucks at 6:19 PM