the last book I ever read (Andrew Holleran's Grief, excerpt one) 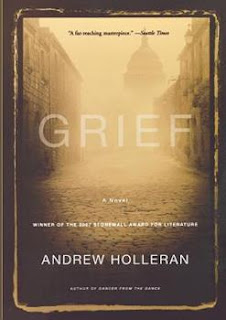 The weekend I arrived, however, my landlord wasn’t home; he was at another house he owned, in the mountains, three hours west of the city, where he had a small shop that sold a mix of antiques, theatrical props, and novelties. It was the holiday honoring Martin Luther King Jr. The airports were so empty it felt like I was passig through Limbo—from one life to the next. In fact I was leaving behind a life: the non-life, rather, that people who take care of someone face after the invalid dies; in this case, after a long period of helplessness spent mostly in a nursing home—a place that my mother had always asked me to keep her out of, no matter what happened; till what happened made it necessary. The idea of moving to a city seemed like a good idea, so when an old friend asked me if I’d teach a course—someone was going on sabbatical—I accepted.

But sitting in the airport on a Saturday I had only felt lost. Like someone cleaning a room who opens a drawer and finds something he did not want to find, I realized I had chosen to travel on the one day when I felt worst; since Saturday was the day when I had for the past twelve years driven to the nursing home to remove my mother for the weekend—a day of such happiness for both of us (eliminating the nursing home), that the only thing that spoiled it was the gauntlet of people who were being left behind when I wheeled her chair down the hallway, a prisoner being freed while the others watched. Or perhaps, I thought now, that was an element of the pleasure; so confused was I still about what all that had meant. What was clear was that I’d become used to going there on Saturdays; something I was not doing among the strangers sitting around me in the vacant sunny lounge of the airport in Atlanta—that womb, that amniotic fluid, in which the traveler floats, detached from all his elements of identity. To get to Heaven, the joke goes, you change planes in Atlanta. The day my mother had fallen I’d flown north as if going to the afterlife, traveling toward what I thought was her death as in a dream, too much in shock to even feel anything but strange; the silence of the cabin, the clouds outside, the quiet passengers, all ignorant of my awful news. Now, after her death, years later, I was flying north again with the same bizarre feeling. You never know, I thought, watching the other passengers settle into the plastic chairs around me, who is flying on a bereavement discount. There’s no way to tell—though most of the families I could see, peering over the newspaper I was reading at their exchanges, seemed to still have one another.