the last book I ever read (Venita Blackburn's Black Jesus and Other Superheroes: Stories, excerpt one) 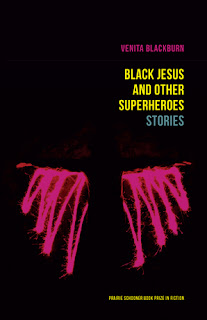 from Black Jesus and Other Superheroes: Stories by Venita Blackburn:

Uncle Dwayne became my parental figure for the next ten years. Being cared for by an adult single man with Posttraumatic Stress Disorder is some exciting and scary shit. Odd alone does not describe the experience justly. Dwayne always lived in our house on the floor in the den, and even after my parents passed, that’s where he stayed, leaving the master bedroom unoccupied. He tried to tell me my wheelchair was a spaceship, a time machine, an assault vehicle with semiautomatic weapon capabilities. Dwayne stood six feet five inches and had skin like diet cola poured from a can, full of motion and light. In his head he was a rock star. In front of me he was a Minotaur, hooves and muscle in too-sheer boxers. I didn’t just play along for the first two years, I basked in his sudden revelations. He always had big ideas. Once he drained the pool at our house and built a slide for me to go down. The problem was I could never get out of the pool if I didn’t have help. One night I slide down on my own, and the thrill of the fall, the independence of being by myself in the dark outside elated me, but, of course, my chair slipped, and I landed on my shoulder. That glorious error allowed me the chance to watch the stars alone for five hours with a fractured collarbone. I thought there would be stars, but the majority of the sky presented just blackness, great and number and chilled. Only the bizarre passenger jets and helicopters with their goofy dragonfly mannerisms floated under the dark. The eleven-year-old air conditioner whirred then stopped, then whirred them stopped in even intervals.The odor of animal waste is a noble thing, the truest evidence of living. All that evidence of life from the farms miles and miles away and the pets just over the fences nearby collected in a fierce, invisible cloud. The night wind remained callous and inert.