the last book I ever read (The Sellout: A Novel by Paul Beatty, excerpt nine) 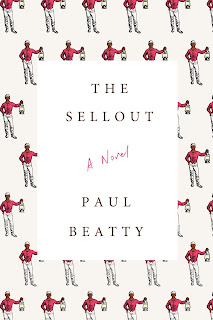 The philosophy professor on sabbatical inbounded the ball. A personal-injury lawyer hit a corner jumper. Displaying a surprisingly good handle, a fat pharmacist cross-overed a pediatrician, but bricked the layup. The day trader air-balled a shot that sailed out of bounds and rolled toward the parking lot. Even in L.A., where luxury cars, like shopping carts at the supermarket, are everywhere you look, Foy’s ’56 300SL was unmistakable. There couldn’t have been more than a hundred left on the planet. Near the front fender, Foy sat in a small lawn chair, dressed in only his boxers, a T-shirt, and sandals, chatting into his phone and typing on a laptop almost as old as his car. He was drying clothes. His shirts and pants hanging from hangers hooked onto the car’s gull-wing doors, which were in full flight and hovering above like wings on a silver dragon. I had to ask. I got up and walked past the basketball game. Two players vying for a loose ball tumbled by. Arguing over possession before they got to their feet.

“Who’s that off of?” a player in beat-up sneakers asked me, his outstretched arms a silent plea for mercy. I recognized the guy. The mustachioed lead detective in a long-canceled but still-in-syndication cop show—big in Ukraine. “That’s off the dude with the hairy chest.” The movie star disagreed. But it was the right call.