the last book I ever read (Anne Tyler's A Spool of Blue Thread, excerpt six) 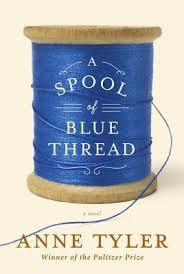 from A Spool of Blue Thread: A Novel by Anne Tyler:

Mr. Whitshank was holding forth on Billie Holiday. She had died a couple of days before and Mr. Whitshank couldn’t see why people were so cut up about it. “Always sounded to me like she couldn’t hold on to a note,” he said. “Her voice would go slippy-slidey and sometimes she’d mislay the tune.” He had a way of rotating his face slowly from one side of the table to the other as he spoke, so as to include all his listeners. Abby felt like some sort of disciple hanging on her master’s every word, which she suspected was his purpose. Then she altered her vision—she was good at that—and imagined she was sitting at a table of threshers or corn pickers or such, one of those old-time harvest gatherings, and this cheered her up. When she had a home of her own, she wanted it to be just as expansive and welcoming as the Whitshanks’, with strays dropping by for meals and young people talking on the porch. Her parents’ house felt so close; the Whitshanks’ house felt open. No thanks to Mr. Whitshank. But wasn’t that always the way? It was the woman who set the tone.