the last book I ever read (Nell Zink's The Wallcreeper, excerpt three) 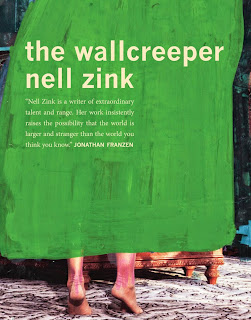 Sometimes I would sit and go over things Stephen had said during our whirlwind courtship, fitting them into a context I was learning only slowly. It was hard. He had told me so little about himself, intent on taking note of my little foibles so he could, for instance, surprise me with tickets to Berg’s Lulu.

The birds were Stephen’s intimate sphere. He didn’t have to be cool or funny or even appetizing about them. “Breeding and feeding,” Stephen called their lifestyle, making them sound like sex-obsessed gluttons (that is, human being) instead of the light-as-air seasonal orgiasts they were in reality—ludicrously tragic animals, always fleeing the slightest hint of bad weather in a panic, yelling for months on end to defend territories the size of a handball court, having brief, nerdy sex and laying clutch after clutch of eggs for predators, taking helpless wrong turns that led them to freeze to death, drown, starve, or be cornered by hunters on frozen lakes, too tired to move.

To Stephen they were paragons of insatiable, elemental appetite. I saw them differently. I imagined two ducks, loyal partners. When the hunters cornered them, would they turn to face them, holding hands? Hell no. They would scatter like flies in as many directions as there were ducks. The duck who got hit would look up with his last strength to make eye contact with his lifelong friend, who would shake her head as if to say, “Hush now. Don’t rat me out just because you’re dying.” Love would conquer all.