the last book I ever read (John Kennedy Toole's A Confederacy of Dunces, excerpt four) 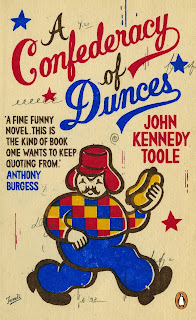 “Angelo’s got him a hard road to travel,” Mrs. Reilly said absently. She was thinking of the PEACE TO MEN OF GOODWILL sign that Ignatius had tacked to the front of their house after he had come home from work. Miss Annie had immediately started an inquisition about that as soon as it had appeared, screaming questions through her shutters. “What you think about somebody wants peace, Claude?”

“Ignatius got a sign up in front the house about peace.”

“I mighta known,” Santa said angrily. “First that boy wants a king, now he wants peace. I’m telling you, Irene. For your own good. That boy’s gotta be put away.”