the last book I ever read (The Passage of Power, excerpt four) 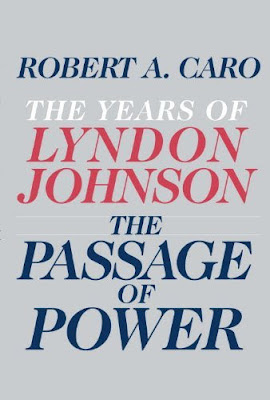 from Robert A. Caro's The Passage of Power: The Years of Lyndon Johnson:

Other considerations, however, were much more than tactical--because they related not so much to a comparison between the Senate leadership and the vice presidency but to the great aim of his life: the job he had spent so many years scheming and sacrificing to obtain.

His chance to win his party's nomination in 1960 was gone now, and if in the general election Kennedy defeated the Republican nominee, and served his full two terms, he might not get another chance until 1968. There was of course a possibility--Kennedy might lose to the Republican--that he would get another chance at the nomination in 1964, but Kennedy, despite his loss, would be coming into that convention as the party's last standard-bearer, and would be even harder to beat than he had just been; it wasn't much of a possibility. Eight years would probably be how long Lyndon Johnson would have to wait. And in eight years Lyndon Johnson would be sixty--and that was an age that throughout his life had loomed before him with a grim, talismanic significance. All during his boyhood, he had heard relatives repeating a piece of family lore: that all Johnson men had weak hearts and died young. Then, while he was still in college and his father was barely fifty years old, Sam Ealy's heart had begun to fail, and he had died in 1937, twelve days after his sixtieth birthday. Two years later, one of his father's two younger brothers--Lyndon's uncle--had died suddenly of a massive heart attack, at the age of fifty-seven. Lyndon, always conscious of his remarkable physical resemblance to his tall, big-eared, big-nosed father, was convinced--convinced, one of his secretaries says, "to the point of obsession"--that he had inherited the Johnson legacy. "I'm not gonna live to be but sixty," he would say. "My daddy died at sixty. My uncle . . ." With attempts to argue him out of this belief he had no patience; once, when Lady Bird was trying to reassure him that he would not die young, he looked at her scornfully and said flatly: "It's a lead-pipe cinch." And then, in 1955, at the age of forty-six, he had had his own massive heart attack. Now, in 1960, with the nomination lost, he felt he couldn't wait eight years for another chance to win it. When, following Kennedy's victory on Wednesday night, Reedy and Busby had been called into his suite, they had seen how depressed he was, and Reedy had tried to console him by pointing out that he would have another chance in eight years. There was a long pause before Lyndon Johnson's reply, and when it came it came in a very low voice. "Too long," he said. "Too long."
Posted by Rob Trucks at 9:03 AM