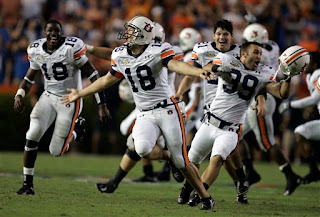 the Phillies beat the Nationals 6-1 and the Mets lose to the Marlins 8-1 to complete the greatest collapse in major league baseball history.

but Auburn STILL beat the previously #4 ranked and defending national champion Florida Gators(for the second year in a row) in the Swamp 20-17.

and while the Mets blowing a 7-game lead with only 17 to play is a real shocker, and Auburn beating Florida (an 18-point favorite) for Urban Meyer's first loss at home, the true holy shite moment of the early fall is Kentucky (not South Florida; Kentucky) ranked in the top ten in football (#8 in both major polls).
I love me some underdogs, but this will never (ever) last. three of their five wins have come against Eastern Kentucky, Kent State and Florida Atlantic (not exactly football powerhouses) and neither Arkansas nor Louisville, even excepting their respective losses to the Wildcats, are playing like folks thought they should.
though the 'Cats have a very favorable schedule (only one away game thus far), it's nothing but SEC opponents, including LSU and Florida in successive weeks(though both games are at home), left on the schedule.
I think they'll be doing well to finish the year at 8-4 (and they're 5-0 now).

but returning to a more pleasant note, all hail freshman kicker Wes Byrum.
and War Eagle.
Posted by Rob Trucks at 4:46 PM